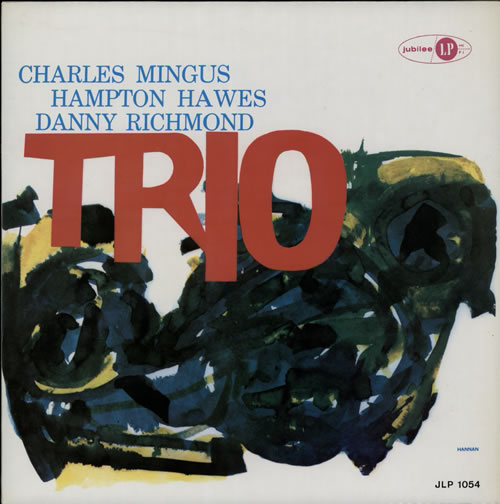 The second Mingus album I ever bought was called “The Wild Bass” but was in fact first released as “Mingus Three”. It’s a seven-track trio session with Richmond on drums and pianist Hampton Hawes. I would have been about 16 when I bought this album so that’s in around 1983. I’ve been listening to this album for thirty years: two-thirds of my life.

I can’t really say that Mingus is the greatest bassist ever because I haven’t heard all the bassists in the world. I have, however, listened to lots of other music and musicians. Jaco Pastorius, of seemingly unlimited technique but inclined to be self-indulgent if not reigned in by Joe Zawinul or Joni Mitchell. At the other end of the artistic spectrum, Mstislav Rostropovich playing a Bach cello concerto. Mingus’s playing, as sideman or soloist, fires all the same neurons as the latter so, to me, he’s there alongside Picasso, Beethoven, Uchida etc etc.

I have read Hamton Hawes’ autobiography, “Raise Up Off Me” and this session gets a passing mention. He was on the streets, desperate for drug money, and he bumped into Mingus who booked him for this session. You’d never think that was a drug-addled pianist you’re listening to: it really is some of the best jazz piano playing I’ve ever heard.

The playing on this album is sublime. Hawes and Mingus play beautiful, complementary and memorable solos, particularly in “I Can’t Get Started” and “Laura/Tea for Two”, and Richmond fits right in. If this album was food, it would give you all your dietary requirements.

Why write this? There are loads of Mingus albums available, many of which are repackaged reissues and it’s often difficult to know what you’re buying. What I’m saying is, this album is a little gem of twentieth-century music.

And you can’t say fairer than that.